A new campaign has started across South Oxfordshire and the Vale of White Horse to highlight the issues and dangers of Nitrous Oxide, more commonly known as laughing gas.

The campaign will see #NoLaughingMatter stencils painted across the districts and there will also be a short online quiz, with a £25 Nando’s or Costa voucher up for grabs.

Most people will have seen the small silver cannisters discarded in public areas, such as parks and high streets. Perhaps they didn’t know what they were, became concerned about people using them or were annoyed at the litter. Maybe they knew exactly what they were and had used them before.

Laughing gas is the second most used recreational drug among young people in the UK aged 16-24. It is sold in small cannisters that can often be found discarded in streets and parks.

Laughing gas is a psychoactive substance – when inhaled it slows down the body’s response time, which can lead to fits of laughter, dizziness and feeling relaxed.  However, it can also cause paranoia, hallucinations, and headaches, and if too much laughing gas is inhaled, the user could suffer shortness of breath or even pass out, potentially putting their life at risk.  When discarded in public areas, the cannisters also cause a litter nuisance.

South Oxfordshire and Vale of White Horse District Councils have launched the #NoLaughingMatter campaign to raise awareness of laughing gas and the risks of using it, and are encouraging residents to report any cannisters they find and to seek advice/support where needed.

Cllr Maggie Filipova-Rivers, Deputy Leader and Cabinet Member for Community Wellbeing at South Oxfordshire District Council, said: “Using Nitrous Oxide may seem relatively harmless, however a few minutes of fun from these cannisters can put peoples’ long-term health at risk and potentially have even more serious consequences.  When that happens it really is No Laughing Matter, so it is important that people are more aware of the dangers, particularly young people who may be under more pressure to try these substances.”

Cllr Helen Pighills, Cabinet Member for Healthy Communities at Vale of White Horse District Council, said: “Through the #NoLaughingMatter campaign we are aiming to highlight the issues and potential dangers of using laughing gas.  As well as reaching out to young people via the stencils and quiz, we would also encourage parents to take a look at the information and advice available and to ensure their children are aware of the risks.”

#NoLaughingMatter – to find out what you need to know about laughing gas and to enter the competition to win a £25 Nando’s or Costa voucher – visit southandvale.gov.uk/nolaughingmatter

If see people using laughing gas, or notice cannisters discarded in a public area, please report it by contacting the Community Safety Team at communitysafety@southandvale.gov.uk or by calling 01235 422590.

For advice and help about laughing gas please Talk to Frank. 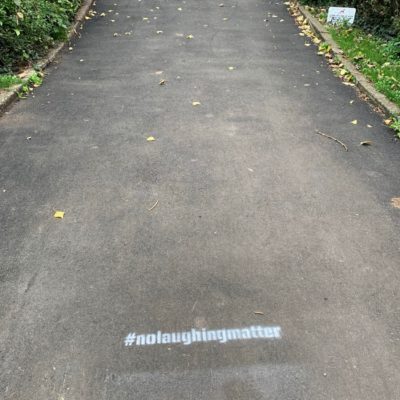